In keeping with the main theme for this month, I am reviewing another lesser known fantasy novel that more people should read.  Really.  You should read it.

Last week, I focused on pure fantasy, a story in another world with its own magical system and culture.  This week, my chosen novel is much closer to home.

Fairytales hold a certain fascination for authors who want material for telling stories.  Telling old stories in a new way has been popular for a very long time, of course, but lately, it seems like there are more versions of Cinderella and Snow White than we could ever possibly need. Ever. 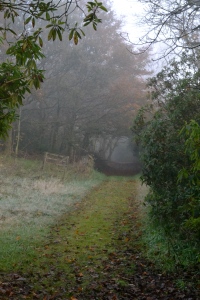 One storyline that has come up a few times in various stories and poems is the goblin and the princess, or some variation thereof.  George MacDonald’s book, of course, uses this motif.  The story comes in many forms, but the general idea is that goblins or something similarly wicked living under ground come out at night and try to steal away a child from its parents or a girl for a bride.  One of two endings is expected: either the child/girl is rescued by someone cleverer than the goblins or, in a darker turn of events, the goblins succeed and their quarry is never seen or heard from again.  While not speaking of goblins in this case, I always think of Yeats’s Stolen Child:

Come away, O human child!
To the waters and the wild
With a faery, hand in hand,
For the world’s more full of weeping than you can understand.

The dark, unsettling fear of something out in the darkness in the forests and under the hills that can simply creep out and steal the unsuspecting, whether by force and trickery, has haunted more than one culture and inspired more than one story. The Hollow Kingdom is exactly that sort of book, with goblins hunting in the darkness and a heroine trying desperately to outwit them, but this tale is delightfully unexpected in its outcome.

Kate and her sister Emily move in with their great-aunts on family land after the death of their father.  Their uncle, who is in charge of Kate’s inheritance until she comes of age, is an unpleasant individual and their aunts are very mild mannered, but Kate and Emily settle in as well as they can and try to make a life at Hallow Hill.  When strange things start happening and the goblins begin to appear when the sun goes down, Kate discovers that unless she is very, very clever, she will be claimed as a bride for the goblin king, Marak, and locked in his kingdom underground for the rest of her life.

The story that follows is filled with bizarre magic, and, with the trap closing inexorably around her, Kate fights blindly against an enemy she does not understand.  Her only hope is to convince her uncle that goblins are real, but her uncle has an agenda of his own.  And besides, what rational person believes in goblins?

Dunkle draws on old stories to create an ancient world under the wild hills of the 19th century British countryside, and she fills the woods and hollows with goblin magic.  Once Kate is in the goblin king’s sights, she becomes increasingly entangled in his world and out of step with her own.  The landscape above the goblin kingdom becomes only slightly less surreal than the world beneath.

My favorite thing about this story is not necessarily that it is an unexpected take on the goblin-stealing-girl storyline.  I love the characters.  Kate is plucky and generally a sensible girl.  Her sister Emily is far too curious and fearless for her own good and finds the goblins more interesting than frightening.  Throughout the story, the strange, magical creatures Dunkle introduces as secondary characters are what make the story truly engaging.  Even the doors have character (read it to find out what I mean).

Retelling old tales is not a bad thing, if it’s done well.  Old motifs can be reworked in an endless number of ways.  What makes a book stand out is when it takes a good, old story and leads its readers on a very different road.