This weekend I rode through L’Enfant Plaza.

There is nothing especially remarkable about riding through L’Enfant Plaza; many thousands of people did the same this weekend.  Not so many, though, had the music of Johann Sebastian Bach playing in their earbuds.  Maybe only one had Bach’s Chaconne from the Partita in D minor for solo violin playing in his earbuds. At least one did.

Much could be said about the article; it is worth a good read and not a little thought. What’s always fascinated me most about it, though, is this quote from Johannes Brahms about Bach’s Chaconne:

On one stave, for a small instrument, the man writes a whole world of the deepest thoughts and most powerful feelings. If I imagined that I could have created, even conceived the piece, I am quite certain that the excess of excitement and earth-shattering experience would have driven me out of my mind.

I won’t linger over Brahms’s first sentence, except to note hearty agreement. It’s the second sentence that interests me most here. For Bach did, after all, create the Chaconne – and creating it did not drive him out of his mind. 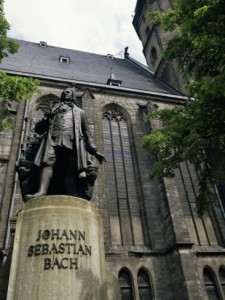 You may credit a number of things for keeping Bach’s boat from tipping over as he composed pieces of such magnificence that composing them would have overthrown Brahms. For example, Bach’s siring twenty kids gave the man’s domestic life plenty of heft, enough heft to provide a good ballast for him as he worked on the Chaconne – next to the demands of his wife and kids, the Chaconne probably seemed to Bach rather a light thing. Or you may look at the astonishing diversity of Bach’s genius – he was a brilliant composer, a formidable organist, and an expert in organ-building, among many other things – as something that kept him balanced and sane.

I attribute Bach’s sanity, though, to a few letters he wrote on most of his transcriptions. Bach began most of these with “J.J.” – Jesu, Juva (“Jesus, help”), or “I.N.J” (In Nomine Jesu).  He ended them with “S.D.G.” (Soli Deo Gloria – “to God alone the glory”). He opened with invocations, closed with dedications. Here the contrast between Bach’s thoughts and Brahms’s – “if I imagined that I could have created” – is as great as the contrast between Chesterton’s poet, who wants to get his head into the heavens, and Chesterton’s logician, who wants to get the heavens into his head. The one gets a good view; the other gets a bad headache. A sanity-killing headache.

Nothing kills creativity, or sanity in the midst of great creative exertion, like a creator’s interest in his own identity. A creator may create worlds – whole worlds of the deepest thoughts and most powerful feelings, for a small instrument, on one stave – but only so long as he is not busy creating himself, and not a moment longer. Here is the difference, not just between Brahms and Bach, or between Chesterton’s logician and Chesterton’s poet, but between the Serpent who ever provokes us to make names for ourselves, and the eternal Word of God, who rests wholly in the identity given Him by His Father, even as He creates and then renews the world.