Hello everyone! So, this is my last post of the month and as I said last week, I’ll be doing my next few posts about Neuromancer. I want to get into detail with where some of the coolest ideas of the book have shaped science fiction, but with this post I’d like to start with an introduction to the book, to the ideas I’ll be examining, and on the book’s impact not only on sci-fi but on the world.

**WARNING: All of my enthusiasm and endorsements are tempered by the unfortunately very graphic violent and sexual content in this book. It’s not as bad as some, but it’s definitely there, so I cannot in good conscience recommend this book without making this very clear. You have been warned. To those put off by this I would say don’t read it, but the examination of the science fiction elements in this novel should still be very interesting to you**

Pretty Good for a First 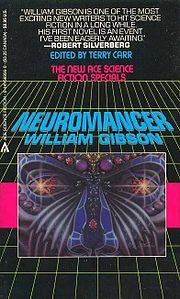 You would be surprised just how many ideas and words you encounter every day that can be traced back to William Gibson’s book, Neuromancer, which is the first of his Sprawl trilogy (not something I knew before researching this). It was the first ever winner of the science-fiction “triple crown” of the Nebula Award, the Philip K. Dick Award, and the Hugo Award, reflecting the science fiction community’s acknowledgement of this book’s worth and impact. It was also Gibson’s first full-length novel, which is in itself amazing. Reading Gibson’s recollection of his own doubts and terror at having the novel commissioned even though in his mind he was several years away from it is heartening to a new writer such as myself, to say the least. What got Gibson so much attention, however, were the radical new takes on new ideas, and the gritty texture of his new science fiction experience, later called cyberpunk. Underworlds of crime and hacker cred, against the powerful, the politicians, and tyrants of all shapes and sizes, all set in a world defined by technology and the new frontier of cyberspace… but I’ll get to that. Here are some of the ideas that really made Neuromancer stand out:

Well, that’s all for now! I’ll get into how each of these ideas changed the shape of science fiction on my next rotation. Until then, what do you all think of cyberspace and these other ideas in fiction? Is it a hit or miss for you? Let me know in the comments below!