Stephanie, currently in New York for a wedding, is interrupting her current series with this post…

The year that I spent in South Korea did more than just make me love spicy food and crave kimchi.  It also introduced me for the first time to Korean cinema, which is sadly overlooked here in the USA.  I’ve always been a fan of foreign films, largely because I’ve grown so disgusted with present-day Hollywood (the good films these days are the exception rather than the rule).  However, until I lived in Korea, I somehow never got around to watching any of the fantastic films the Korean cinema has been producing over the past decade.  Far from stereotypical kung-foo fare (although they produce those films, too), the films that I fell in love with over there are funny, cute, endearing, and meaningful in a way that American films seldom are these days.  Today, I’d like to introduce to you my favorite Korean film of them all, The Classic.

The Classic is one of those rare films that is almost resplendent in its beauty, both in cinematography and in story.  It centers around the storyline of two similar bittersweet romances, one in the 1960s and one in the present day (2003).  The film opens with Ji-hae, a shy, sweet student who is caught in a romantic triangle.  She loves a boy, Sang-min, but believes that he is too popular and attractive to ever notice her.  Shortchanging herself, Ji-hae has fallen into the uncomfortable situation of writing emails to Sang-min
for her friend Su-kyeong, a bold and selfish girl who uses Ji-hae repeatedly and gets away with it.  With her mind troubled by her current situation, Ji-hae stumbles across a large box of dusty old letters belonging to her mother and begins to read.  This introduces the other love story, another triangle, this one between Ji-hae’s mother Ju-hie, and two men, Tae-su and Joon-ha.

Taking place during the turbulent 1960s, a time in which South Korea labored under a highly oppressive and corrupt government, this second love story is definitely the more absorbing of the two.  Ju-hie, the spirited daughter of political official, meets Joon-ha while vacationing in the countryside.  She asks him to take her to see a haunted house, they wind up spending an entire evening and part of a night together (innocently), and love blossoms.  Unfortunately, there is a complication:  Ju-hie is betrothed through an arranged marriage to Tae-su, the rather bumbling but highly likable best friend of Joon-ha.  Joon-ha, much like Ji-hie in the present, winds up writing letters to the person he loves in the name of another (Tae-su).  The young Joon-ha and Ju-hie sneak around to see one another, but are broken-hearted knowing that they cannot be together.  Joon-ha, additionally, is tortured by the guilt of going behind Tae-su’s back, although Tae-su initially merely likes Ju-hie.  Amidst this sad love story, one encounters various images of the harsh conditions Koreans struggled under during this time.

The film continues to follow the progression of the two romances, switching between past and present in a manner that feels natural and embodies the same sort of winding flow that memory takes.  Ju-hie, Joon-ha, and Tae-su encounter student protests against the military dictatorship and the Vietnam War, while Ji-hae, Sang-min, and Su-kyeong deal with much tamer modern situations.  In the end, there is even more entangling of past and present, in a manner that is slightly predictable yet nevertheless beautiful.  Being an Asian film, the ending is bittersweet:  Asian romances do not generally have happy endings for all of the protagonists.

The Classic is not only a breath-taking piece of Korean cinema, it is also a window into another time.  It portrays the harshness and brutality under which South Korea labored fifty years ago, and also shows the magnificent changes that have since taken place.  It also demonstrates how certain things, like expectations of human behavior, have stayed very similar despite the complete political reversal and modernization.  If you are an American wanting to better understand Korean culture, this film is an excellent start. 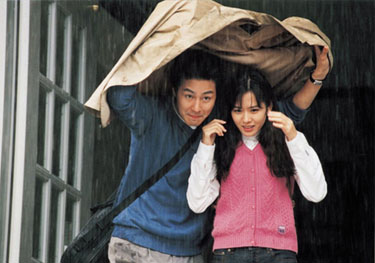 I really cannot praise this film enough.  It is so well done, so well filmed, so well acted . . . it really feels just like walking through someone else’s memories, yet with an intimacy that almost makes the viewer feel that these are his or her own memories.  It connects with the viewer in a very rare and special way.  Seldom have I laughed, cried, and become so absorbed in a single film.  The language, all in Hangul (Korean), gives this a much greater realism, even though part of the plot is, admittedly, a bit fanciful.  When I watch this film, I really am gazing through a window into another world, yet at the same time, I can marvel at how similar many of the characters quirks and mannerisms are to my own.  The Classic is a wonderful film for bridging the Eastern/Western culture gap.

I would be remiss if I did not discuss the use of rain throughout this film.  Although many people swear by Sleepless in Seattle as the ultimate rainy day movie, The Classic tops it.  Rain is present in several of the film’s most romantic and most endearing moments, making for gorgeous visuals.  In fact, as I reflect back on the plot, rain actually plays an essential key role in both romances!  Having lived in Korea, I smiled at the many rainy scenes:  Oh yes, I well remember all the rain!  There is a reason that Korea is so green and beautiful.

Watching The Classic brings back so many special memories for me from my wonderful year over there.  I’m sure that Korean War vets, like my late Uncle Vern, would not have these same warm memories, but as a modern-day foreigner living abroad, I found South Korea to be enchanting, extremely friendly, and, frankly, one of my favorite places on earth.  It is interesting for me to watch the scenes that take place in the Seoul of the 1960s and then contrast them with the Seoul of 2008-9, which I visited several times.  The country scenes are even more endearing to me, as they remind of beautiful Gyeongju, my home during that year abroad.  I can’t help but smile, remembering how I used to ride my bike past the rice paddies and mountains that lay just minutes away from my studio apartment.

I would highly recommend this film to adults, but not to children.  Although the love stories are all very innocent (no sex scenes — hurray!), there are a few violent scenes and a few scenes that portray realistic brutality (beatings and such).  As an adult, I find these a bit hard to watch.  I, personally, would not let a child under the age of 16 see this film, despite the prevailing present-day attitude of “Let’s show the kids every possible disturbing or depraved image that we can think of, then wonder why schools are becoming such violent hotbeds of degradation”.  I think that older teens (16, 17, and 18) would benefit from seeing this and then, afterward, discussing what they have seen.  This could spark some excellent conversation on history and culture.

Or, adults could enjoy viewing this film in the manner that I did when I saw it for the first time:  I picked up a few Korean snacks from a local international store, cooked up some delicious homemade fried rice and cashew chicken, and then two good friends and I sat munching our food with chopsticks while we shared the experience of this film together.